Our first Jurisprudence was obtained by means of the Strategic Passport C.B.

If one of our clients falls prey to a plagiarist, we have designed an original strategy to defend him.
It is the Strategic Passport C.B. (Copyright Business).
The purpose of this strategy is to save time and money to any inventor or SME otherwise unable to afford the undertaking or completion of a Civil Law Suit.

Lawyers know it, as many amongst inventors are constrained to refrain from pursuing such a venture.

Out of our hundreds of clients, only eight have been plagiarized.
Why so few?
We are not authorized to publicize the details of any confidential out-of-court settlement. Nevertheless, we can describe the public trials that have given way to our first Jurisprudence.
By selecting “Our Jurisprudence”, you can download relevant documents to that effect for your perusal.

Plagiarism of a literary or artistic work must first be pleaded using Penal Law: according to all International Conventions concerning Copyright (Author’s Rights), including internal Laws of each Nation, the creator of a literary or artistic work naturally holds its world ownership, solely by its creation, which is non-transferable and inalienable.  It is from this natural property (published or unpublished) that is derived the Law governing moral and patrimonial rights of the author.  This law grants to the creator of the work the exclusive* right to produce, reproduce and interpret it during his entire life and several decades after his passing (for his heirs and legatees). Considering that illegally copying all or any part of the work – plagiarism –first constitutes theft of property (before any infringement of a title), it is preferable for the victim to begin his legal proceeding by filing a complaint with the Police against the natural person of the director within the company at fault. In this manner, the burden of proof and ensuing court fees are thus incumbent on the thief (faced by the fear of a criminal prosecution, matters are usually settled out-of-Court through a mutual agreement). Otherwise, once the Sentence is rendered and evidence provided, nothing prevents the author from suing the thief using Civil Law to obtain financial compensation for his damages.
In Summary:
“Copyright (Author’s Rights) forbids any third party the right to copy the description(texts and drawings) of the invention to produce it.”
“The patent surrenders to a third party the right to copy the description
(texts and drawings) of the invention but forbids the right to produce it.”
The infringement of a patent is a Civil Law matter: according to all international Conventions concerning patents, including internal Laws of each Nation, the patent holder has a twenty-year monopolistic* right to manufacture and exploit his invention in any Nation where his patent is filed. Its international extension is commensurate to the financial means at his disposal to cover the legal costs of defence against opponents, as well as the related translation fees and annuities. The mandatory publication of a patent instigates an untimely curiosity from international predators at his invention. These predators tend to infringe without scruple. Being well aware of the impecuniosity of their victim, they have but little fear of being sued. In Civil Law, the burden of proof is incumbent upon the victim. The so-called “protection” on the invention (not the inventor) solely falls upon the financial means to sustain the defence costs in Court (national and international). In Civil Law, the defence of a patent is, therefore, a money matter before one of Law.
*Monopoly and Exclusivity. Two words that do not share the same meaning. Akin to a driver's license, a patent is a title (cancellable) issued by the State for a predetermined period of time. On account that the right that it procures counters that of free market, it grants the holder an explicitly temporary monopoly. Similar to the procreation of which he is the parent, the mere creation of a literary or artistic work is the natural property of its creator. The State is not involved.   The natural bond between an author and his intellectual property is indestructible. For this reason, his property is global, non-transferable and inalienable. (Regardless of the country crossed by a car driver, he always remains the owner of his car). The property on the work is tangible and producible in a Court of Law. As in the case of parental right, the resulting copyright (Author’s Rights) bestows upon the creator the exclusive enjoyment of his property. This is not a temporary monopoly. Any Nation that embeds a property right in its Constitution applies the same principle of exclusivity on any personal or estate property. 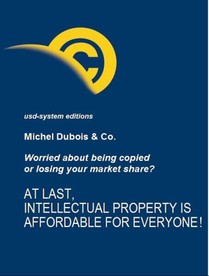